Bidens pilosa is a herbaceous flowering plant in the daisy family Asteraceae. It seeds have a burr that sticks on to the clothing of those who get near. So, people will involuntarily carry its seeds. Its many common names include black-jack, beggarticks (beggar’s ticks), farmer’s friends, Spanish needle, cobblers pegs, pitchforks, stick-tights, burr marigold.

Although the burr marigold has some medicinal properties in the view of traditional medicine, it is generally considered as a wild weed in Vietnam.

In Vietnam, during the Vietnam War, soldiers adopted the burr marigold as a vegetable, which led to it being known as the “soldier vegetable”.

The leaves of B. pilosa have a bitter and a bit pungent taste, somewhat related to chrysanthemum greens (Glebionis coronaria). So, it should be blanched to dispel the pungent smell. Common cooking method is stir-frying with garlic or with beef. Sometimes it’s cooked in soups, or used in salads. 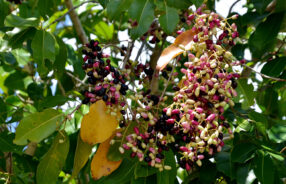